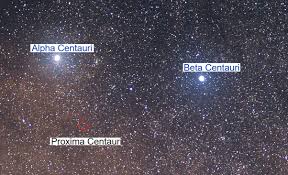 Alpha Centauri A and B are Sun-like stars (Class G and K), and together they form the binary star Alpha Centauri AB. To the naked eye, the two main components appear to be a single star with an apparent magnitude of −0.27, forming the brightest star in the southern constellation of Centaurus and the third-brightest in the night sky, outshone only by Sirius and Canopus.

Alpha Centauri A has 1.1 times the mass and 1.519 times the luminosity of the Sun, while Alpha Centauri B is smaller and cooler, at 0.907 times the Sun’s mass and 0.445 times its luminosity.The pair orbit around a common centre with an orbital period of 79.91 years.Their elliptical orbit is eccentric, so that the distance between A and B varies from 35.6 astronomical units (AU), or about the distance between Pluto and the Sun, to that between Saturn and the Sun (11.2 AU).